Home News October is here! Get your Sport news fix!

October is here! Get your Sport news fix! 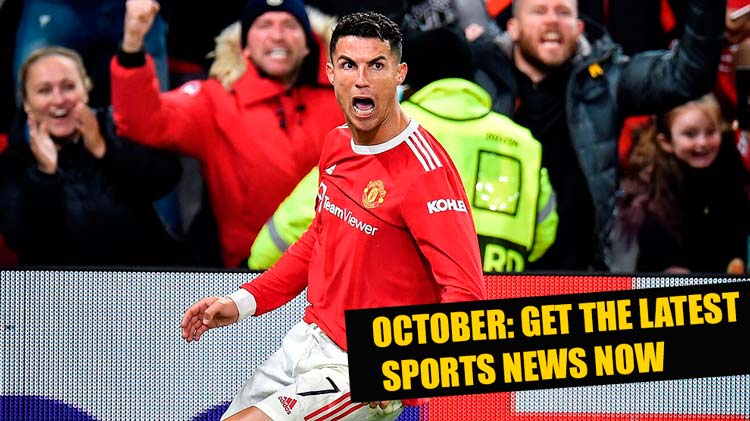 We have compiled the October latest sports news here, in this selection of the most current news from the last few weeks. Find out how the world of sports is moving, from soccer to Formula 1 and many other fields.

The latest sports news of the week

José Fontán sidelined due to a sprain

On Wednesday the 13th, Celta announced that José Fontán would have to leave the game for a while. Apparently, during morning training, Fontán sprained his left knee, which prevents him from playing.

The team doctor insists that he must rest to avoid long-term effects. The club, for its part, is very attentive to how the player’s condition may evolve.

However, this is not the first time Fontán has had to rest due to injury. Previously, he had suffered a fibrillar rupture in the right hamstring. This prevented him from playing on matchdays two and three.

US F1 GP 2021: How to beat Hamilton according to Rosberg

From the moment the hybrid era started, only one driver has been able to beat Lewis Hamilton: Nico Rosberg, his former teammate. This happened in 2016. Rosberg won the cup with 385 points, 5 over Hamilton.

Although in the last race, Hamilton won, it was Nico Rosberg who carried the best performance. Interestingly, he later decided to retire, but now he shares the secret that led him to victory.

He says you need to look at everything your opponent does, and not just on the track. In addition, although Hamilton has proven to be the best driver in the world, he has weaknesses.

Hamilton has had slumps in motivation, and as a rival, you have to take advantage of that and give 110% of your performance. Precisely in one of those slumps, we could say that Rosberg stepped on the gas pedal to the metal.

The threshold is surprisingly high, but this tip could help Max Verstappen to win, considering that they barely take 6 points. While the Mercedes driver has 256.5 points, the Red Bull driver has 262.5.

After the consortium acquired the club for £305 million, Newcastle sack manager, Steve Bruce, following the £305 million takeover of the club by the Saudi Arabia-led consortium.

Steve Bruce is considering retirement as he leaves Newcastle 13 days after the takeover of the club by a Saudi Arabia-led consortium; former Roma boss Paulo Fonseca is a candidate to replace Bruce and is expected to hold talks with Newcastle this week; Graeme Jones will take over on an interim basis.

Newcastle United’s new owners have sacked head coach Steve Bruce. Although he was actually expected to be replaced shortly after the takeover. What no one expected was that they still did not have the replacement.

Steve Bruce had a good run as manager, but starting with the loss to Tottenham, it all went downhill. Many fans criticized the style of play that Bruce imposed on the players.

That is why Bruce stated that this would certainly be his last coaching job. Many believe that he will take advantage of his age to retire and devote himself to his family and, above all, to his wife.

Former Bournemouth boss Eddie Howe is another candidate, along with former Borussia Dortmund boss Lucien Fabre. However, until a decision is made, Graeme Jones will be the team’s interim manager.

Among the week’s sports news, one shocked the state of Washington. Coach Nick Rolovich sought a religious exemption to avoid vaccinating against COVID-19.

State and university policies required all staff to be vaccinated by Oct. 18 if they wished to continue working. However, Rolovich, along with four assistant coaches refused.

The assistants were Ricky Logo, Craig Stutzmann, Mark Weber and John Richardson. All were fired along with Rolovich, but things didn’t stop there. Rolovich’s attorney advised that they would be taking legal action against the state of Washington for injustice.

The first week of games had been held in mid-August. That was just one day before restrictions were increased for COVID-18 in Auckland.

Since then, no further games had been played. New Zealand Basketball had expected the competition to resume at the end of the year. However, with the championship suspended in phase 3 and the uncertainty that followed, the decision was made to cancel it.

Justin Nelson, general manager of the NBL, expressed disappointment on behalf of himself and everyone who was looking forward to the championship. He stressed the importance of increasing vaccination rates in order to renew with new forces next year.

Scotland on the road to Super 12 baseball

Scotland came within a whisker of reaching the Super 12 stage of the Twenty20 World Cup. The team managed a victory against Papua New Guinea. Meanwhile, Bangladesh regained their momentum with a big win over host nation Oman. In their first match, Scotland defeated Bangladesh thanks to Richie Berrington and Josh Davey.

Bangladesh and Oman remain tied on two points, six behind Scotland. Things are not so good for Papua New Guinea, who have lost two in a row. All indications are that they will soon drop out of the championship.

Next Friday, Scotland will play Oman, while Bangladesh will face PNG.

Former Ireland rugby captain Rory Best will take up the position of assistant coach with Fiji for the November tour. He will be responsible for the hard coaching of the forwards, while outgoing Fiji Sevens coach Gareth Baber will be the head coach.

These are the Nets’ favorites for the NBA title

If you want to keep up with the latest in sports, especially when it comes to the NBA, here’s a run down of the favorites.

The championship kicked off on October 20 with two opening games. The first is between the Brooklyn Nets and the champion Milwaukee Bucks. The Golden State Warriors and the Los Angeles Lakers followed this.

In total, there will be 109 international players from 39 countries. Canada, with 18 players, is the most representative country for the eighth consecutive year, followed by the United States.

Next are Germany, Australia and France, which have seven players each playing in the opening night games. Spain, Nigeria, Serbia and Turkey each have five players on the NBA’s 30 teams.

The Toronto Raptors have 10 international players, while the Dallas Mavericks and Oklahoma City Thuder have seven internationals each.

Steven Adams, the famed New Zealand player, will play for the Memphis Grizzlies this year. However, Luka Doncic of the Dallas Mavericks is the favorite player to win the Most Valuable Player award. In terms of betting, the largest sums are placed on the Brooklyn Nets, followed by the Los Angeles Lakers.

Rugby player Quade Cooper is on a tirade. Negotiations between Rugby Australia and Japanese club Hanazono Kintetsi Liners continue. After the weekend is game against Japan in Oita, it should be decided whether Cooper will go to Europe with the Wallabies.

According to World Rugby, Cooper is eligible for release from the November Tests against Wales, Scotland and England. However, Australia could not require Cooper for Saturday’s test against Japan.

It turns out that Cooper, after taking over the game against Japan, said he was unsure if he would be able to continue playing. He made the excuse that he had to undergo tough training sessions throughout the week. Continuing with such demand means his body may not respond to him as it should.

Either way, Dave Rennie, head coach of the Wallabies, said he would not adhere as closely to World Rugby’s rules. The aim? To maintain good relations with Japanese rugby clubs, as there are more and more Australian players there.

China has custody of the Olympic flame

A Panethenaic stadium with solid police custody was the place where the organizers of the Beijing 2022 Winter Olympics received the Olympic flame. Human rights activists protested, claiming that China’s record should be considered before handing over the flame to them.

Beijing Games Vice President Yu Zaiqing kicked off the ceremony by lighting a small torch. On October 20, the torch arrived in China’s capital. It will remain there until February 4 next year, when the opening of the Games will take place.

Beijing will thus become the first city to host both the Summer and Winter Olympics.

Be that as it may, the mainly Tibetan activists had broken a police cordon hours before the ceremony. In addition, U.S. lawmakers have insisted the Olympic Committee relocate the games. They allege that China is committing genocide against the Uighurs and some Muslim groups.

The Buffalo Sabres: A scrappy, but steady team

They have moved forward with their sights near the top of the NHL, maintaining an error-free record of 3-0-0. Although a good portion of the league has played just two games, they are the only one of the teams to have three straight wins so far.

So far, they’ve faced Arizona, Vancouver and Montreal, which aren’t the best teams. However, the Buffalo surprisingly have been able to beat them with a 40-year-old goalie, no good forward and a defense that leaves a lot to be desired.

In addition, although many expect the Buffalo to get back to where they belong, there is hope for them. After all, the championship is just beginning, but the team has played well.

Experts believe that this good performance is due to Don Granato, the team’s coach. His system consists of a very fast and aggressive game, which so far has taken the other teams off base.

In addition, the team has a great point in its favor: since no one expects anything from them, there is no pressure to make them make mistakes. They can concentrate without any distractions in their heads. Although it may not seem like it, this is a gigantic advantage.

But don’t underestimate the Buffalo Sabres either. They’re not a bad team, just a little sloppy and perhaps inexperienced. But they’ve had time to prepare and the on-court strategy shows.

The fans have shown their solidarity and enthusiasm, filling the streets with blue and gold, emblems of the team. Who knows? Maybe this team will dethrone the big teams this season.

Many soccer fans are sure to wonder how many goals Cristiano Ronaldo has scored in his career. The Red Devils striker is one of the most recognized goal scorers in the world. Currently, the Portuguese star has 793 goals in 1,083 games.

Will Ronaldo accumulate 800 goals before December?

Wanna bet on Ronaldo? Bet here with the best Bitcoin Casinos to get the most of your crypto: 1XBit – BitStarz or click here to see our full list of bitcoincasinos