Westbrook Activates $47.1 Million With The Lakers 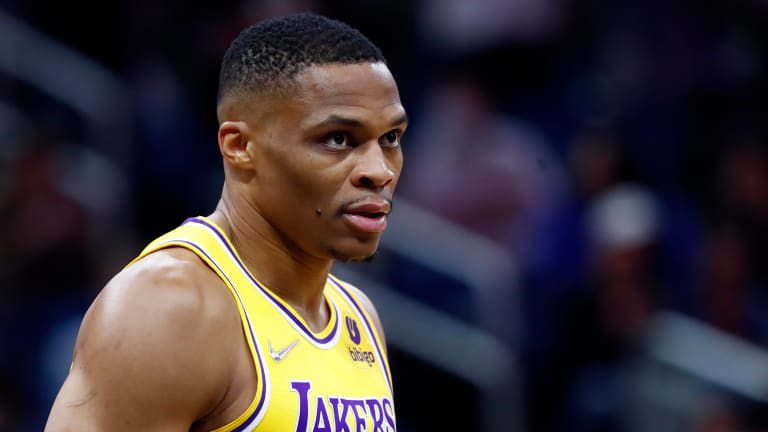 Considering the money in the discussion, Los Angeles Lakers player Russell Westbrook will activate the $47.1 million option in the last year of his contract.

The point guard’s deal is considered a depreciating asset since he inked it in 2017 after his last campaign with Oklahoma City, which saw him named the 2017 NBA MVP.

The star has played for the Lakers, Houston Rockets, and Washington Wizards in the last three years.

The Lakers spent the better part of the season looking for a trade partner for the player’s colossal contract, but they were unsuccessful.

They will shop his deal since it is almost ending, but including future first-round picks adds to the problem of identifying teams that could match his salary in a swap deal.

The Lakers expect value in return for the player, which is proving challenging to find considering his paycheck.

Since his partnership with Kevin Durant in Oklahoma City, the player has played in five series playoffs in which he has only won one.

His low-efficiency, high-usage type of play has resulted in dismal performances compared to LeBron James, James Harden, and Bradley Beal in the last three seasons.

Westbrook Had A Dismal Performance

His contribution to the Lakers team could be termed as dismal, which played a part in the termination of Frank Vogel’s contract, which was significant in the Lakers’ 2020 championship victory.

Westbrook went to the new coach, Darvin Ham’s first press conference, and Ham stated publicly that Russell was still among the best talents in NBA, and there is still a lot left in him.

He also asked him to sacrifice his playing style.

According to his statement, he and the player had engaged in various discussions and the most important thing that could be derived from it was sacrifice.

He went on to state how they were going to make sacrifices.

This was not only regarding Russell but also other superstars like LeBron, Anthony Davis, and the rest of the team.

He revealed they needed to work on their defense and how Russell will fit into the team’s defensive plans.

The coach confirmed that he expected the player to provide the same effectiveness and energy that has characterized his career before joining the Lakers.

A lot of the training will obviously concentrate on him playing without the ball since he has to improve defensively, and this, according to the coach, will require sacrifice.

He talked about the need for Westbrook to play defensively and the possibility of making him a key player.

His inability to play defensively and unwillingness to be on the bench could create similar issues the previous coach experienced.

Davis and James Injuries Were Disastrous For The Team

The freedom to be the athlete he considers himself was not enough to make him forgo $47.1 million and walk into the market as a free agent to test if other teams would allow him into their teams for a lower salary.

Westbrook and The Lakers entered an agreement in last year’s blockbuster deal, and now they have no option but to accommodate each other for another season unless a trade partner comes forth before the end of his contract.

The Lakers go into free agency Wednesday with fewer contracts to deal with to complete their roster around the key players: Westbrook, LeBron James, and Anthony Davis.

Injuries kept James and Davis away from the court for more extended periods of the season as the team finished 33-49.

This translated to the 11th position in Western Conference.